Objective The purpose of this study is to measure the accuracy of commercially available cerebral oximeter monitors tested on identical subjects to eliminate selection bias and ensure uniform data analysis.

An imbalance between cerebral oxygen supply and demand can lead to cerebral hypoxic/ischemic injury and has been reported across a wide spectrum of disorders. Lower levels of cerebral oxygenation have been associated with increased cognitive dysfunction, a higher incidence of major organ morbidity, worse outcomes, and extended hospital length of stay.1 Difficulties in detecting cerebral ischemia as it occurs may cause missed opportunities to prevent or minimize permanent ischemic brain and other organ injury.2

Measurements of cerebral oxygenation are useful in assessing the balance between cerebral metabolic supply and demand. Direct invasive methods of measurement such as jugular venous oximetry and brain tissue oxygen tension are expensive and less than ideal. In contrast, cerebral oximetry with near infrared spectroscopy (NIRS) offers a noninvasive, continuous and easy to use measurement of cerebral tissue oxygen saturation and continues to gain acceptance as a crucial monitoring tool in critical care environments.3

Cerebral oximetry has been available as a monitoring device for over a decade. Recent refinements to NIRS technology have resulted in more reliable oximeters with increased accuracy performance.4 Currently, at least three manufacturers have FDA clearance to market NIRS based cerebral oximeters in the United States, but direct comparisons of accuracy among these monitors has been difficult. Some studies have been published where a single monitor brand has been compared to an invasive standard to determine accuracy.5,6 Individual studies, however, provide limited guidance for clinicians to compare the accuracy of devices due to the possibility of patient selection bias or variability in methodologies. Until now, only one published study compared two branded monitors against a mixed venous and arterial reference standard within the same patient cohort.4 While head-to-head comparisons in clinical settings have been reported,7 objective evaluation of the accuracy of the devices without an invasive standard is difficult.

Healthy adult volunteers were enrolled in this IRB-approved volunteer study after obtaining written informed consent at the Hypoxia Research Laboratory at the University of California, San Francisco. Sensors from different manufacturers were randomly placed on alternating right or left sides of each subject’s forehead for each hypoxia run.a An internal jugular vein catheter was placed at the position
of the subject’s superior jugular bulb and an arterial catheter was placed in the subject’s radial artery. During the study period, allsubjects remained in a semi-Fowler’s position to ease breathing. Before affixing a mouthpiece and noseclip, and with subjects breathing room air, an initial blood sample was withdrawn from the two catheters.

Subjects then breathed gas mixtures through the mouthpiece and were instructed to breathe two to three times deeper and faster than normal to speed alveolar gas equilibration. Inspired CO2 was adjusted to maintain an end-tidal CO2 value of 40 ±2 mmHg. Inspired oxygen was adjusted to target SpO2 plateaus in approximately equal increments from 98% down to approximately 68%. Subjects were then given pure oxygen to return to normal state.

Blood samples (1.5 -2.0 ml) from the jugular bulb and radial artery catheters were simultaneously withdrawn during the target plateaus
into heparinized syringes. The cerebral oximetry values reported by each monitor were recorded synchronously on a laptop every two seconds and averaged in ten-second moving windows. Readings from each monitor were identified at the moment of each blood draw. Each blood sample was analyzed for functional oximetry in an OSM3 Hemoximeter (Radiometer Medical ApS, Bronshoj, Denmark) for either radial (SaO2) or jugular (SjvO2) data. The subjects underwent three induced
hypoxia sessions with 7 to 8 blood samples collected each run.
Weighted CO-oximeter reference values were calculated based on the manufacturer’s claims:

Composite precision (±1SD), bias (mean of [CX – oximeter] error value), and Arms (root-mean-square difference between the displayed cerebral oximeter readings and CX)8 values were determined for each monitor including all subjects. Data from this study were then compared to previously published studies based upon similar testing methods on adult volunteers with monitor values measured against weighted CO-oximeter values.

Accuracy data from 23 patients (14 Male / 9 Female; 13 White / 3 Hispanic White / 3 Asian / 2 Black / 2 Multiracial; 20-40 years; 54.5 - 97.7 kg) comprising 175-180 data points for each monitor are reported (Table 1, Figures 1-5). Data from an additional two subjects were excluded from the analysis: on one subject all monitors failed to provide a value and in another both the INVOS monitor and EQUANOX monitor with Advance sensors failed to read continuously. In those events where a monitor failed to provide a value, corrective actions such as checking cable connections, replacing hardware, or turning off the opposing sensor were taken, but were unsuccessful in obtaining a measurement from the monitor.

Reference CX values were calculated based upon blood draws when the subjects were breathing room air prior to the hypoxia run and were separated into decade increments and compared with the corresponding cerebral oximeter values (Figure 6-10).

This study represents the first detailed comparative performance analysis of cerebral oximeters using an invasive reference standard and a common cohort, testing methodology, and data analysis. Large differences were observed in the precision of commercially available monitors in healthy adult volunteers undergoing induced hypoxia events with precisions ranging from ±3.90% to ±9.72% (1SD). The FORE-SIGHT Oximeter monitor measured cerebral oxygenation with the greatest precision (3.90%) and Arms accuracy (4.26%). Data from this study is consistent with several earlier validation studies. Two reports of the FORE-SIGHT Oximeter demonstrated similar precisions of 3.70%5 and 3.12%4, respectively. Furthermore, one of those studies also included a comparison to an INVOS monitor and measured an INVOS precision of 9.62%4, consistent with the precision of 9.69% reported in this study. The current results, however, do not agree with another INVOS reported volunteer hypoxia study showing a precision of 5.0%.9

The EQUANOX Classic sensor has FDA clearance as a trending sensor, but absolute accuracy data published earlier indicated a Arms of 8.3%10, similar to the Arms of 8.47% determined in this study. In contrast with a previous study where EQUANOX Advance sensors reported an Arms value of 4.10%6, this investigation measured an Arms accuracy for those sensors of 6.86%. No standard deviation was
available in the previous study.

The variations in measured accuracy across investigations highlight the difficulty of comparing performance across studies employing different subjects and methodology. This study controlled experimental and analysis conditions to ensure traceability of truly comparative data.

Room air measurement values are important because they often are used as a baseline for determining treatment interventions based upon decrements or trends in that value.11 The FORE-SIGHT Oximeter reported all room air values (Figure 6) in the expected range for healthy adults of 60% to 80%, with a distribution mirroring the reference values. Other manufacturer’s oximeters reported a wide variety of subject room air saturation values ranging from less than 40% to greater than 80%. Large variability in baseline room air values may undermine treatment confidence when intervention at fixed oxygenation levels (e.g., 60%1) are prescribed or when the values are used to stratify risk for cardiac patients prior to on-pump surgery.11

Clinicians should be aware of the limitations of certain cerebral oximeters as accuracy varies considerably among brands. Advancements
in NIRS technology as found in the FORE-SIGHT Oximeter provide improved accuracy affording clinicians increased confidence to intervene appropriately in the care of their patients. 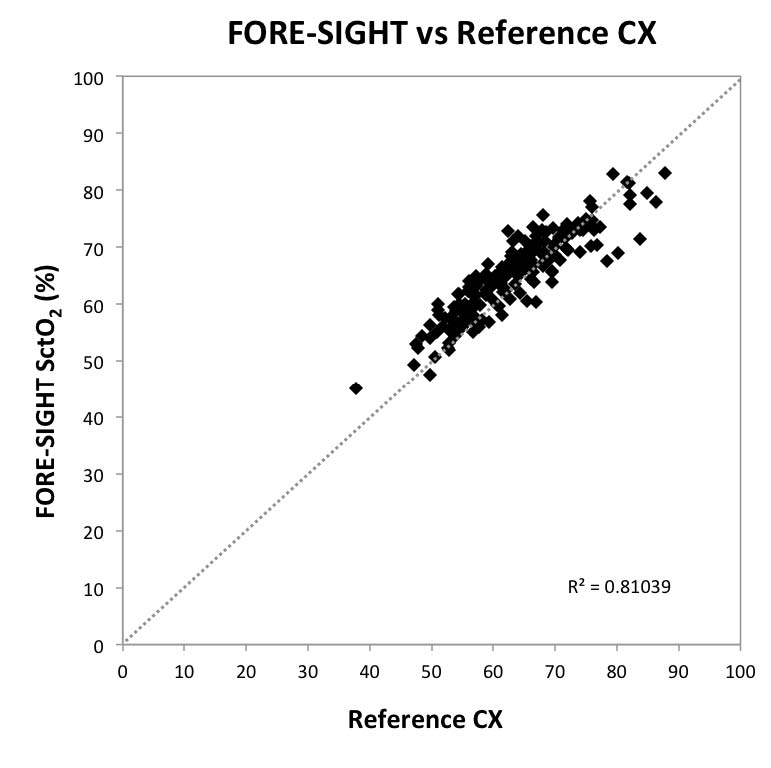 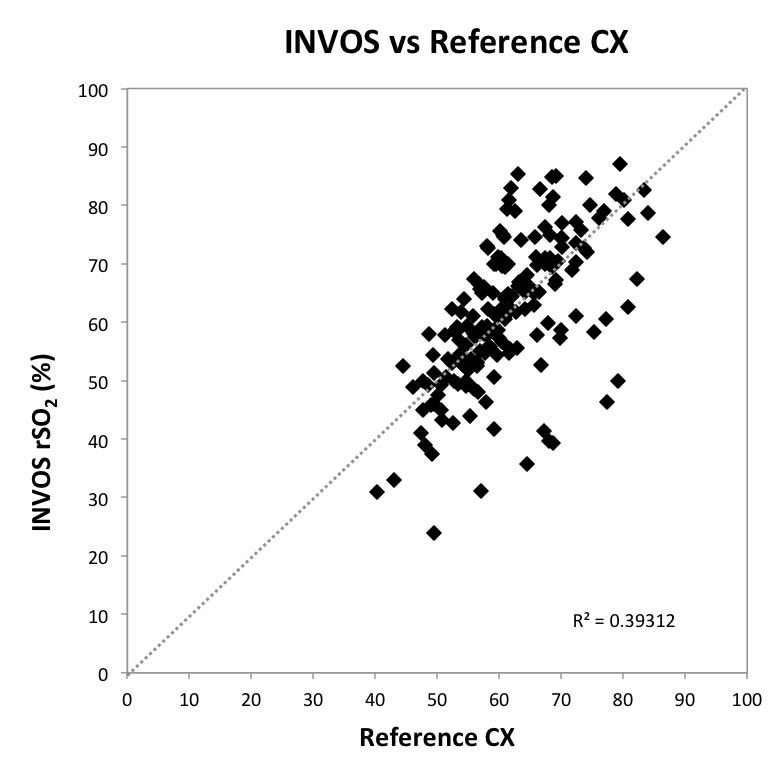 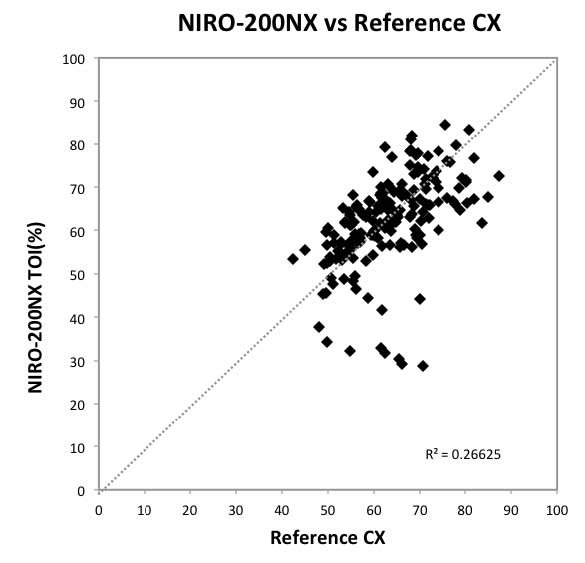 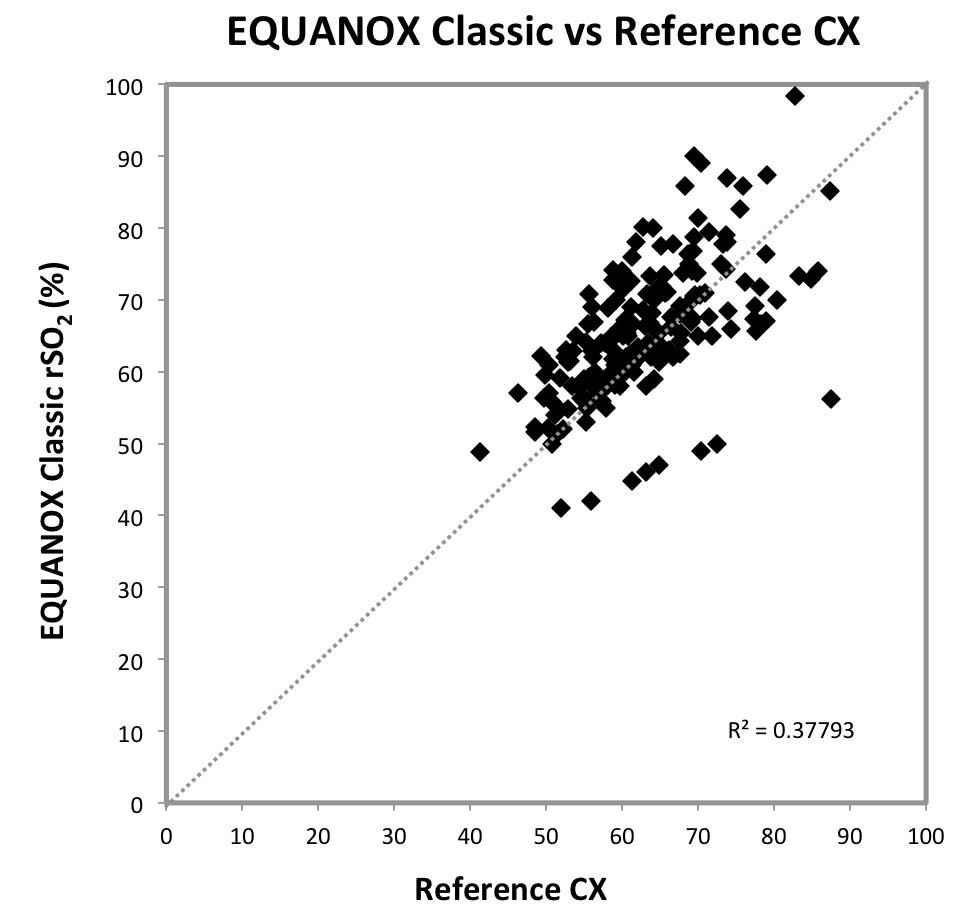 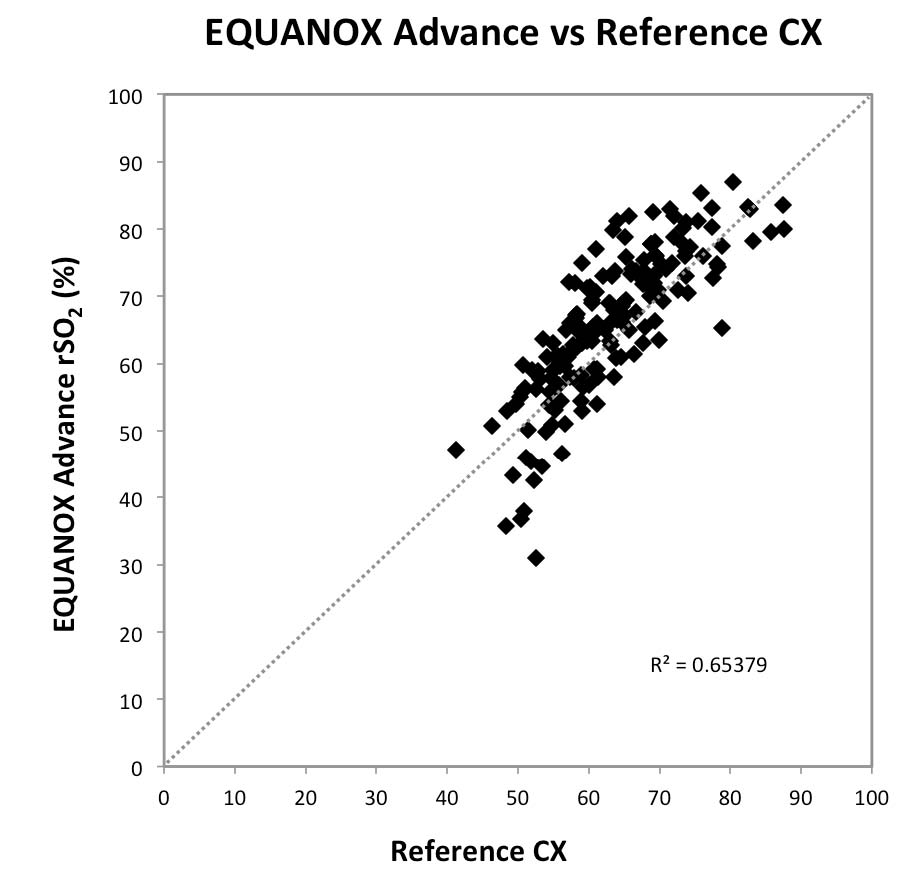 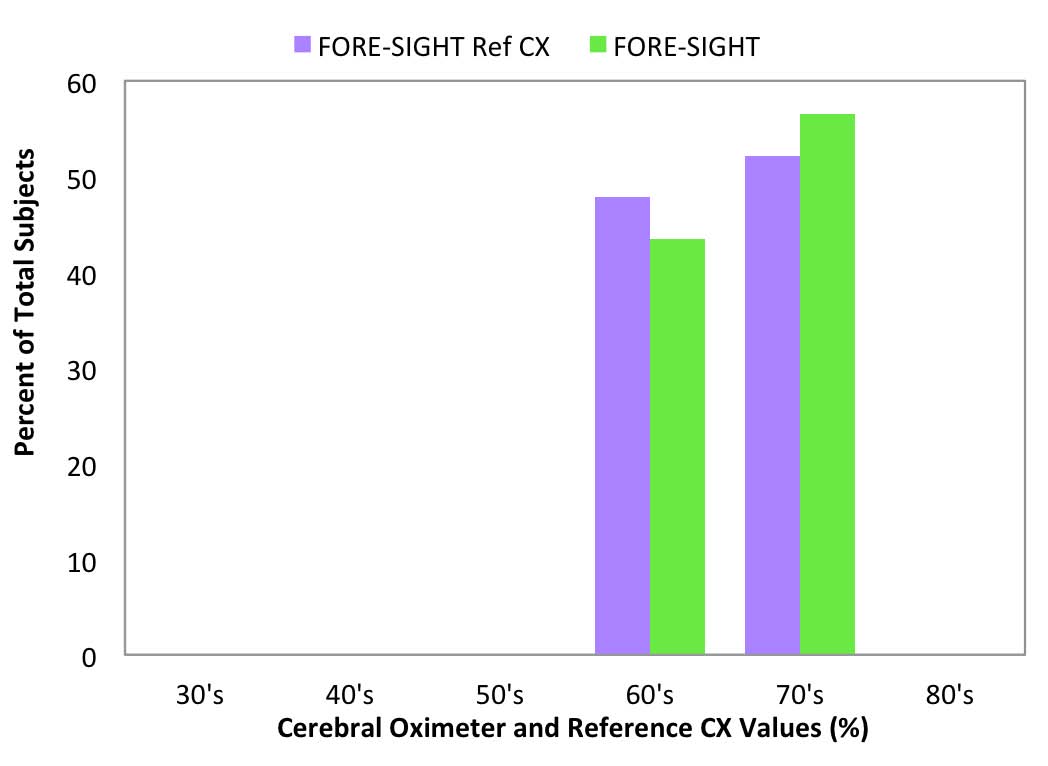 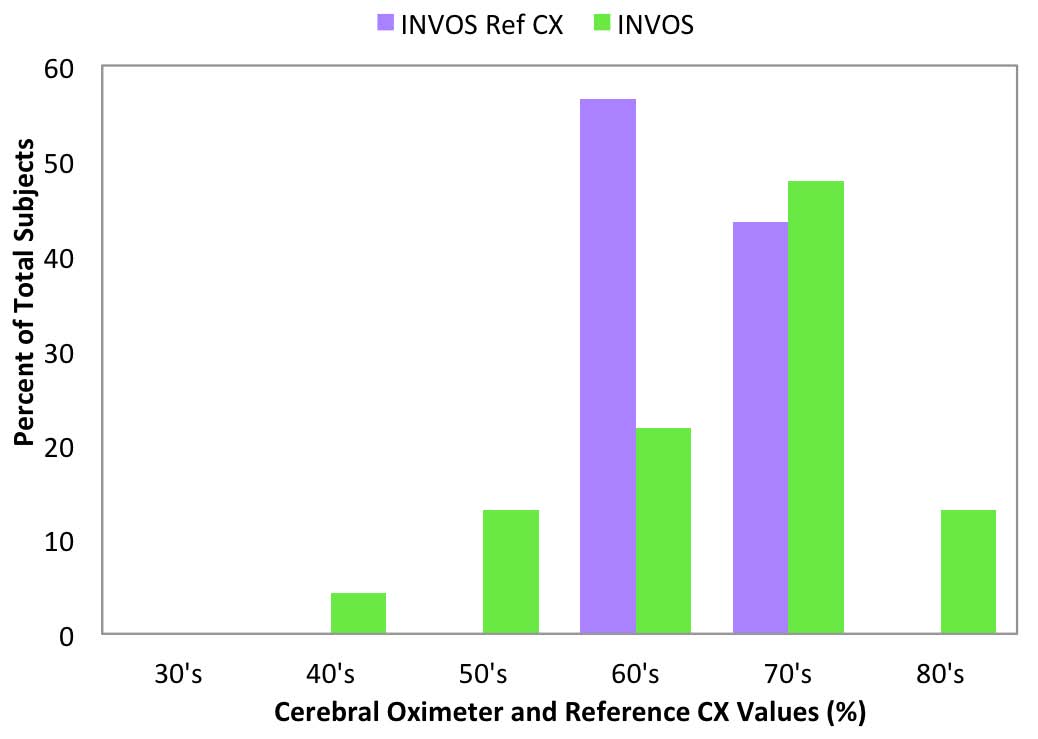 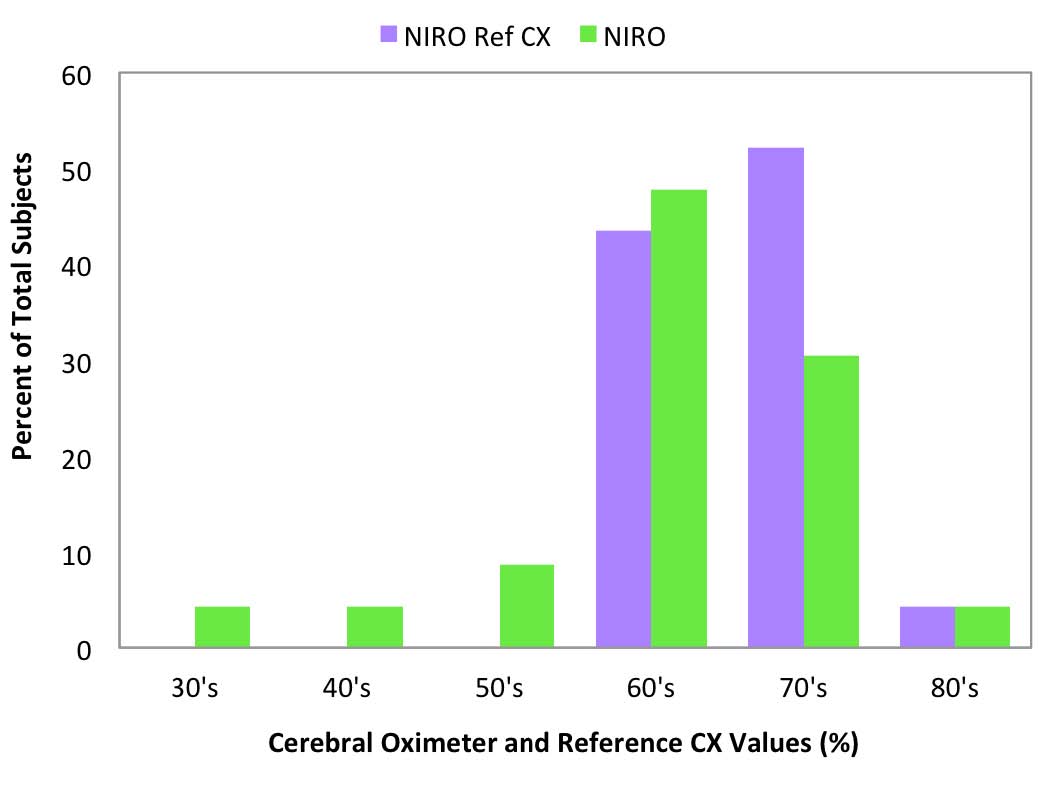 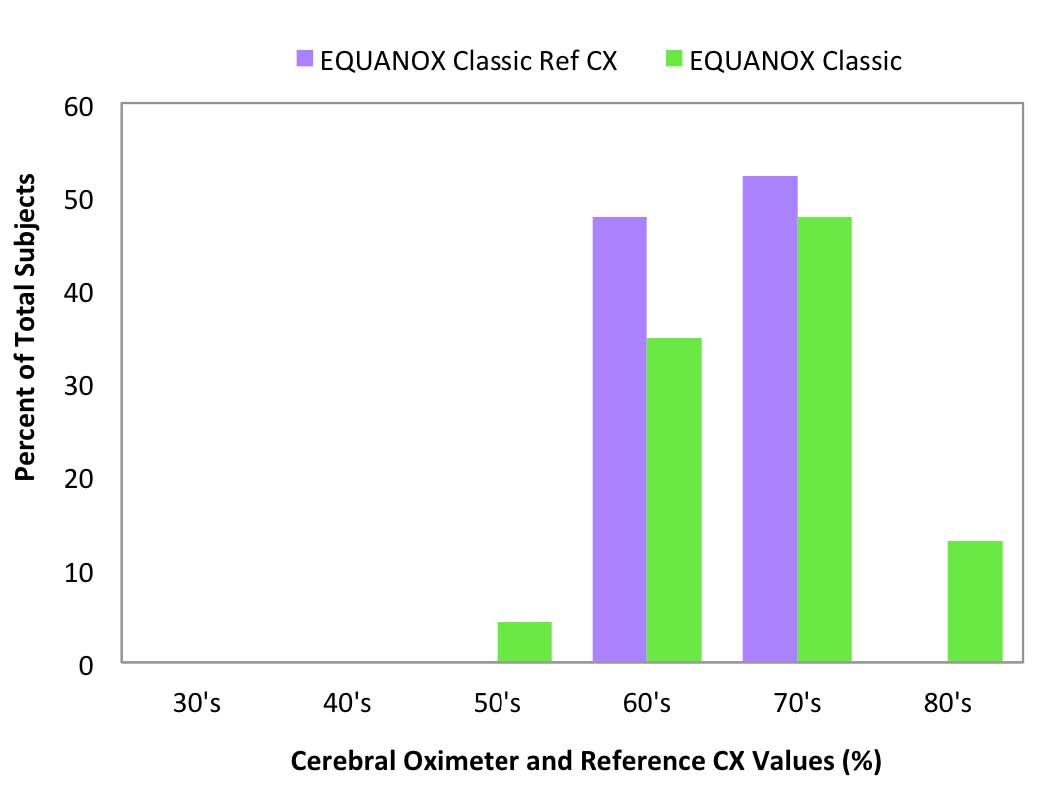 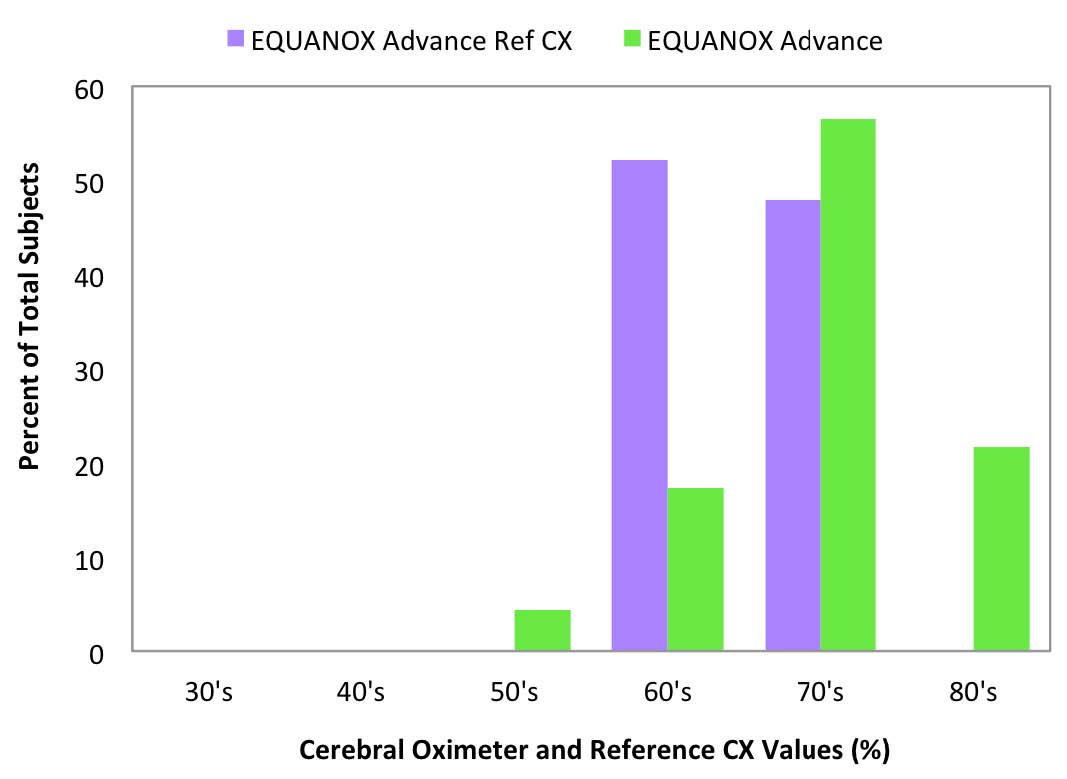